In response to my recent post about 20th century urbanism here in Rochester, fellow Rochester urbanist Tim Raymond suggested that I find a report from the 20s authored by planner Harland Bartholomew. With the help of the Rochester Regional Community Design Center (RRCDC), I found it, and have it in hand. Entitled “A Major Street Plan for Rochester, New York,” and created by Bartholomew & Associates, (they call themselves City Plan and Landscape Engineers), it was published in 1929.

The “Street Plan” is the bad seed of 20th century urbanism here. From this document we can easily get a glimpse of the first nasty tendrils of what was to become the poisonous Inner Loop. Not originally planned to be a moat, certainly – that madness comes later. But in this document, the automobile gains right-of-way over reasonable civic and urban principles, and the future course of regional sprawl is assured.

Here’s what was troubling the Rochester City Planning Board when they retained Bartholomew for the study: 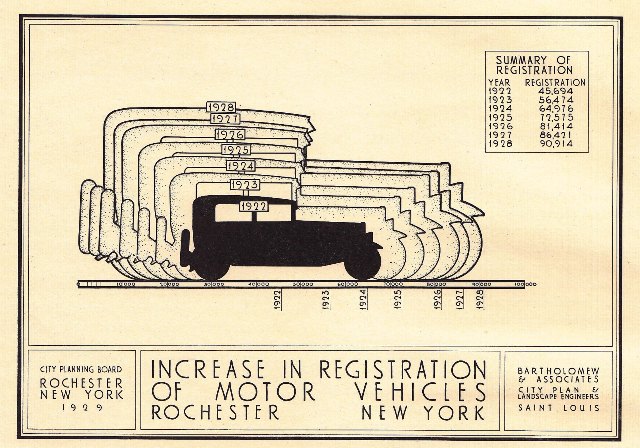 And of course with more cars comes more traffic, and more congestion. In 1929, professionals were beginning to understand how to analyze and engineer for the ‘motor age.’ Traffic counts, average daily trips per roadway, turning radius requirements, lane widths – all of this was becoming an identifiable discipline.

So with 91,000 cars, and an engineer’s perspective (if it’s scientific, it must be inarguable), here’s what you get: 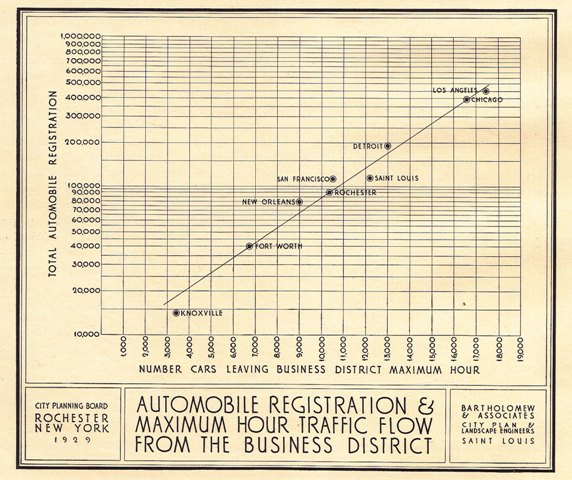 Of course if we had 10,500 cars leaving downtown at rush hour today, we would think the place had been abandoned. But in the 20s, the roads that the motor age was heir to were not designed for speed, convenience or volume. Most of the city streets were designed for horses and carts, and some redesigned for streetcars. But not motor cars.

Roads for the motor age had to carry lots of cars, and more importantly they had to go places at speed – distant places. And so Bartholomew recommended redoing old streets, and creating new streets, sufficient to meet these new criteria. Like this: 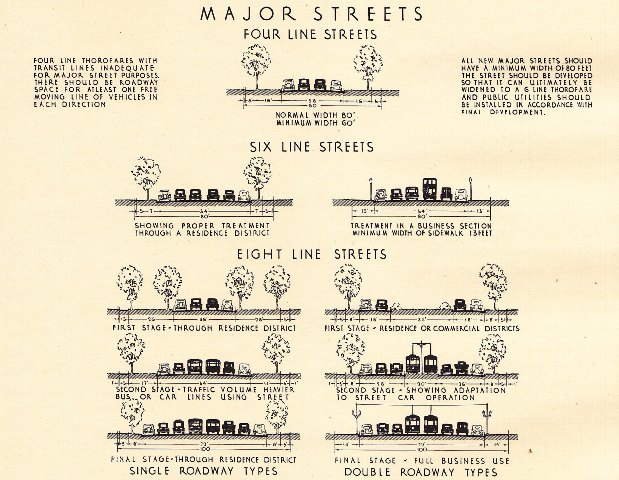 And for the minor streets:

And once the basic rules were established for street widths – we call them cartways today – the routing and connecting and constructing could begin. And so here we go, down the path that resulted 20 years later in the Inner Loop as we now know it.

First, a look at the downtown roadway and circulation system before the study: 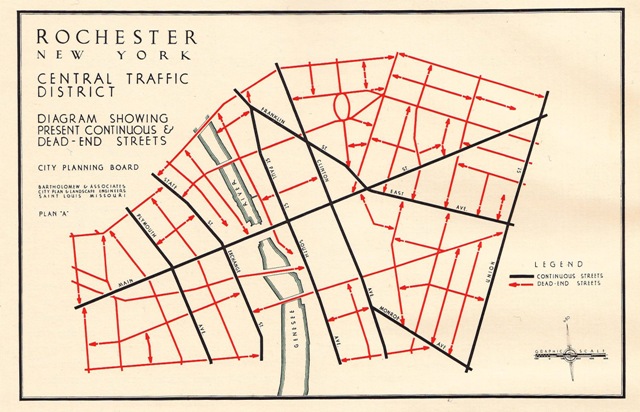 And then a look at the report’s recommendations for downtown: 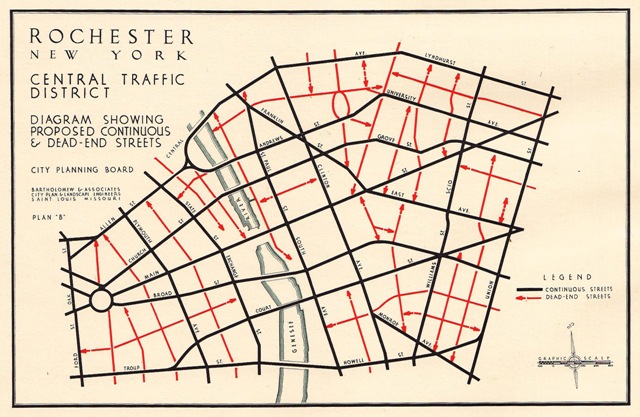 Now the strategy becomes clear. Create a loop of streets around downtown, and through streets within downtown, that are straight, continuous, wide enough for higher volume, and speedy. We’re gettin’ out of town….

And of course we need to see the downtown loop in the context of the roadways of the region. This next image is scary, startling. The city is doomed. 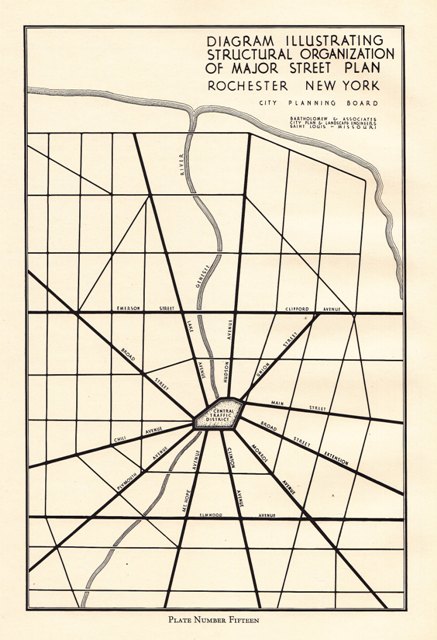 So there it is – the Inner Loop at the core, and the beginnings of the outer loops of the other expressways. The stage is set for the predicted city population of 1,000,000  “within the next 50 years” – they got that right – to spread out all over the place with the new network of roads for cars.

To make the point of all this with a bit more force, take a look at this: 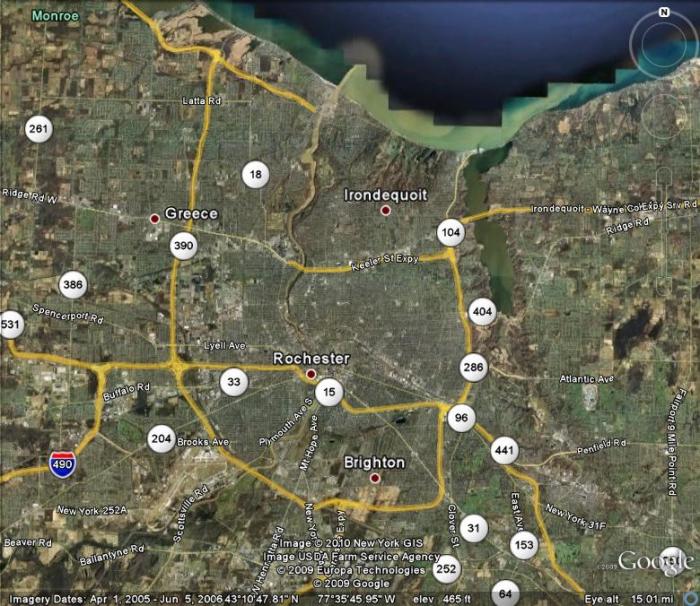 Bartholomew was aware, in some tiny way, of the dangers that lay ahead. In the report he says, “The automobile has invited an excessive spread of population and it is important that the consequent development beyond the present municipal boundaries be carefully controlled to prevent chaotic and uneconomic tendencies.” Which, of course,  it wasn’t.

Perhaps more interestingly, and pathetically, Bartholomew shows us, in a brief two sentences early in the report, what really lies behind all this roadway business: “It is of utmost importance that the population of the city be uniformly distributed. An over-concentration of population is usually accompanied by poor housing conditions and other social problems.”

15 thoughts on “Sowing the Seeds of Sprawl”

A Motto for the Next City

A sustainable city is one that finds the means (forms, shapes, structures and activities) to meet the needs of the present without compromising the ability of future generations to meet their own needs.

How to Make the Right Choice

"A thing is right when it tends to preserve the integrity, stability, and beauty of the biotic community. It is wrong when it tends otherwise." Aldo Leopold

"They say that time changes things, but you actually have to change them yourself." A. Warhol

"We have become so used to living among surroundings in which beauty has little or no place that we do not realise what a remarkable and unique feature the ugliness of modern life is." Raymond Unwin